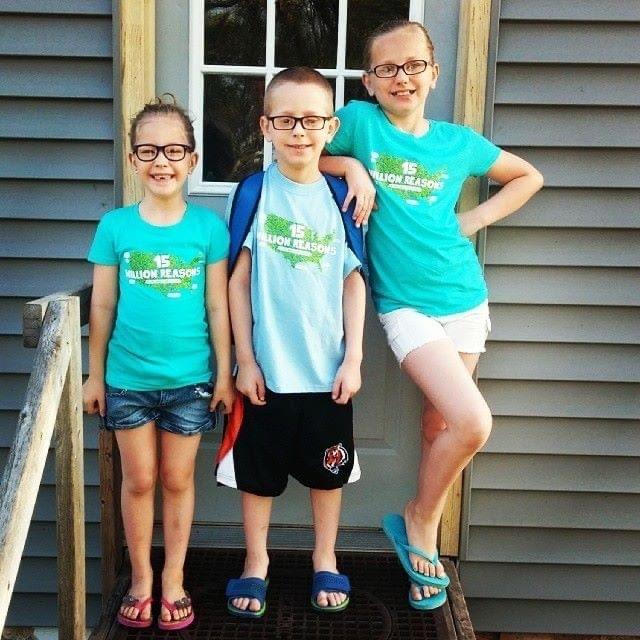 Here’s a throw back of Harper, Jaxon and I rocking our allergy awareness shirts.

I know I usually share a funny story, and don’t worry, there are more to come, but this week, I'm doing something a little different. This week, I would like to tell you about my other brother, Jaxon. Jaxon Charles is two years younger than me, and we have our moments from being best friends to acting like the other one doesn’t even exist. I won’t lie, this is mainly because I’m jealous of how smart he is. Do you know how annoying it is to work my butt off for better grades than him?! Anyway, I’m going off topic here.  As a baby, Jaxon kept getting really sick. He would have extremely dry skin, and it would cause open sores on his face. Finally, when he turned ten months old, my parents found out he was severely allergic to a long list of things (and I mean looooooong.) Throughout the years, he has developed more and more allergies, allergies to things you didn’t know you could even be allergic to. The short list includes peanuts, tree nuts, eggs, soy, animals, most trees, a bacteria in dirt (yep, dirt), dust, molds, and on and on and on. Along with his allergies, he has severe asthma. We even found out he wasn’t able to smell anything because of the blockage in his nasal cavity, so he had multiple surgeries. They only helped for a couple months. The other day, he got even more bad news from the allergist/asthma doctor. He found out he is only breathing at a 61% lung capacity and that his nasal passage is completely swollen shut. He also found out his dust allergy has become almost as severe as his peanut allergy! Now, don't be mistaken, I’m not telling you all of this stuff to take pity on Jaxon. No, I’m telling this so you can understand how strong this amazing brother of mine is. Throughout all of the obstacles he has been faced, he stays ridiculously positive. Out of all the people I know, (trust me, this isn’t an exaggeration) Jaxon truly is one of the most positive and kindest. Jaxon once had to write an essay about if there was one thing in his life that he could change, what would it be? It took him hours to come up with something. Everyone in the family said, “uhhh ... allergies, duh,” and he replied, “absolutely not, they have made me who I am.” Seriously, what 14 year old says that? He has told us in the past that his allergies and asthma have helped him to appreciate everything in life. He doesn’t take for granted what is given to him and never focuses on what is taken away. Does this make him perfect? Of course not. He is an annoying brother and causes silly problems. It might be silly but finding out that Jaxon is just a normal, crabby teen like the rest of us has brought us closer. Jaxon is funny, smart and strong. He has overcome things that, in my opinion, not even superheroes could. He has lived his life to the fullest, always seeing the glass half full. He has never let anything or anyone drag him down. He always takes the good out of the bad. Jaxon is someone that I think most of us dream to be. He has taught me, and hopefully you, to never give up. Jaxon Charles Groenhoff is truly my superhero, but please don’t tell him, he doesn’t need a big head.