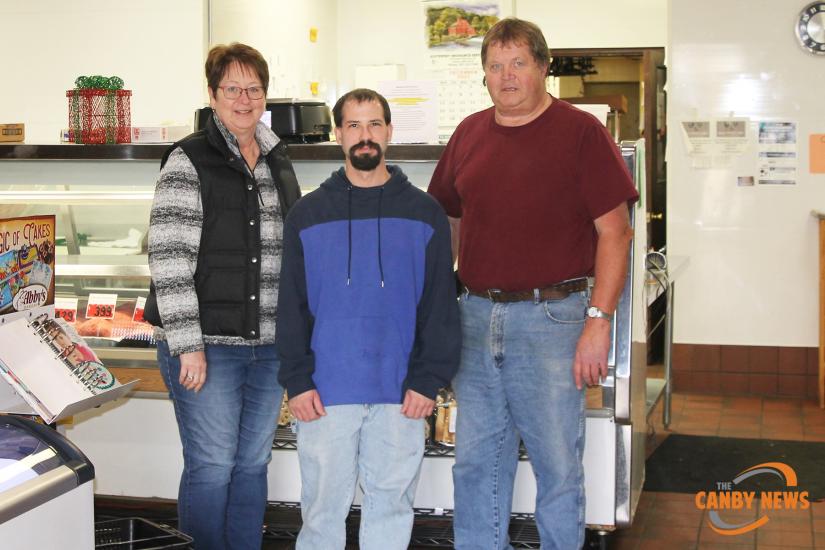 The residents of Canby and the surrounding area know if you go to Moberg Meat Center, rest assured, you are getting quality product at a fair price.

For the past 13 years, Chuck and Bonnie Moberg have had the pleasure of being a cog in the wheel of Canby’s top notch retail community, something that they are proud to be a part of.

“When you have people coming into your business and say that your town is becoming a destination for us, that’s something,” said Chuck.

“We are fortunate to be a community that supports you,” added Bonnie.

Chuck Moberg found his interest in meat cutting after joining FFA meat judging during high school in Marshall. He signed up for a one-year meat cutting program out of Pipestone and started working in Aitkin after graduation. After two years in Aitkin, Moberg returned to the Canby area, where he worked in what was then Gordy’s Locker for 11 years. He then became the meat manager at Jim’s Red Owl, were he stayed for 15 years before moving to on the road sales for Schweigert. After eight years with Schweigerts, an opportunity arose that was just too perfect for the Mobergs to pass up.

“We had an opportunity to buy this place,” said Bonnie. “It was always his passion, the sausage making and that kind of thing. It was fun to return to his roots.”

And now, another man with a passion for providing quality products will try his hand at owning his own butcher shop with the Moberg Meat Center becoming the Canby Meat Center on the first of the year.

New owner, Daniel VanDerostyne, has worked in the business for the last 16 years. When the Mobergs began discussing the possibility of selling around a year and a half ago, they approached their employees first. When VanDerostyne came forward wanting to buy, a deal was struck. “We didn’t even put it up for sale,” said Chuck.

As for Vanderostyne, jumping into ownership didn’t seem like that big of a leap. “Either way, I got to show up,” he joked.

And for those worried that the business changing hands means big changes as well, you can rest easy. “The people won’t notice the difference,” assured Bonnie.

“Nothing is changing,” added Chuck. “It is pretty much going to stay the same. That is why working with him (Danny) was the easiest. No one is coming in trying to reinvent the wheel.”

Although VanDerostyne may want to add a few changes down the road, it isn’t something he is focusing on right now.

“Nothing is changing — he’s closing the front, no deer meat — that’s all false. Only thing changing is the name on the paycheck,” clarified Chuck.

As for Chuck and Bonnie, they plan on sticking around and helping VanDerostyne get his feet under him. Chuck will be in Mondays through Wednesdays, and Bonnie will help with transitioning bookkeeping duties.

The Mobergs do plan to do a bit of traveling, take some time to fish, which they both enjoy, and just relish in some well-deserved time off.

And one thing is for sure; they won’t have to worry about the business they owned for the past 13 years not succeeding, as Bonnie says, “We are leaving it in very capable hands.”